Law Enforcement Torch Run 2020: Making a Difference, One Athlete at a Time

Special Olympics New York recently caught up with Trooper Heidi Riley, who was among the first to purchase $2,500 worth of LETR 2020 t-shirts for athletes, covering the costs of all 100 athletes in Olean, NY who participate in the annual Trooper Ross Riley Torch Run named after her late husband. Below is her story.

How did you and your family get started with Special Olympics New York and LETR?

I did my first Torch Run years ago when I was stationed up north in Plattsburgh. It was in 2000 though that I knew it would be a part of my life forever. On May 31, 2000, NYS Troopers Mike Kelly and Ken Poorman were killed in a car accident. Mike was an avid runner who had participated in countless Torch Runs. Ross knew them and he and I participated in that run as well. I believe one of the first memorial legs was dedicated to Mike and Ken in Troop F, near Kingston. I still have the shirt with their picture on it!

When we moved to Olean, Ross was already on the SORT team, which ran in the Olean leg to support Special Olympics New York and demonstrate team unity.

What does it mean to you to have the Olean Torch Run named after your husband? 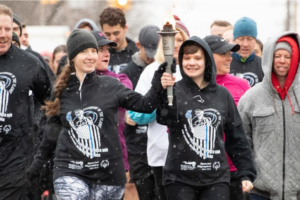 We are incredibly honored that the Olean leg is named in honor of Ross. We have been welcomed with open arms and it has always been a loving and supportive environment, under emotional circumstances. Ross always admired someone with heart who gives their all, and that is precisely who Special Olympics athletes are.

You have three daughters who participate. Do they enjoy it?

Yes! They’ve had various levels of involvement over the past six years, from riding in an escorting Troop car to helping run the entire event all together.

What would Ross want people to know about Special Olympics New York athletes and LETR?

That Special Olympics athletes are “ALL HEART!” That’s why he loved, admired and respected them so much. So to have his name associated with Special Olympics Torch Run right here where we live and work…he would be completely humbled and speechless (which was not like him!).

What made you decide to sponsor so many athletes in Olean this year?

We wanted to provide shirts for the athletes to show our support; that we stand with them as athletes of all abilities, because the heart of an athlete unites us all!

Our deepest thanks to Heidi, and all of our LETR partners across the state for their efforts to make a difference in 2020, one athlete at a time.