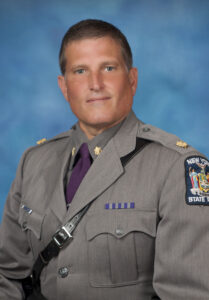 “I became involved with Special Olympics when I was asked to participate in a Torch Run as a young Trooper in 1993, as part of an opening ceremony for a regional games.  Interacting with the athletes and watching them compete sold me.  I knew this was something I needed to be a part of.”

Rick Allen currently serves as the State Director for the Law Enforcement Torch Run for Special Olympics New York, which includes more than 6,000 members statewide, who work to raise awareness and funds for athletes and programs.

Rick currently serves as the Assistant Deputy Superintendent for the New York State Police overseeing Employee Relations and Human Resources for the agency.  He has been a Member of the State Police since 1992 and has served in various assignments throughout New York State rising to become an Executive Officer in the agency.  Rick has been involved in Special Olympics as for over 27 years and was the recipient of the prestigious John Carion Unsung Hero award at the 2018 annual LETR International Conference and is a member of the New York State LETR Hall of Fame.