My name is Kevin Brown, and I am a Special Olympics athlete from New York. I work for the FBI, and I was recently chosen to serve on the Law Enforcement Torch Run International Executive Council.

After graduating high school, I was hired to clean the Federal Building in New York. I worked at this job for several years and was always thorough, on time, and courteous. After studying for over two years and failing once, I finally passed the Federal Civil Service Exam. The Albany FBI office had an opening for a Support Services Clerk, which I qualified for, and I was hired. I am fully trained in the work I do and received some of my training at Quantico. I collect all mail coming into the office, and I x-ray and test it for biohazards. I maintain all records relating to mail and packages and am responsible for maintaining office supplies for all units within the FBI. 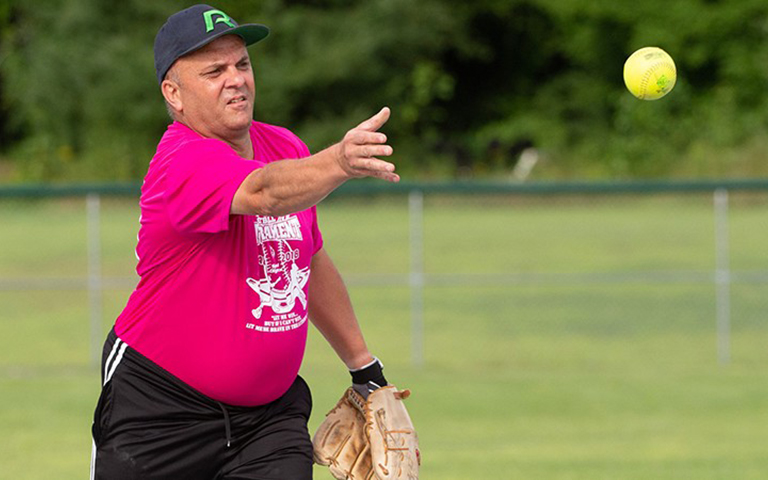 I began my Special Olympics career when I was 8, and I have competed in 5 international competitions. My most recent World Games was the 2007 Special Olympics World Summer Games in China. My volleyball team was competing for silver. In the final game, we were down 8 – 12. Coach called a timeout and told the team that if we wanted to earn that silver, we had to do it on our own. Mr. Tim Shriver was in the audience watching our game, and we were playing China… in China, before over 5,000 spectators cheering for their home team. We overcame the deficit and won silver.

Special Olympics identified me as a leader in 1992, as I became part of the initial class of Ambassador Athletes. Since then, I have been able to communicate the story of my efforts to elevate my life through Special Olympics and sports. I am no longer intimidated by unfamiliar situations or speaking in front of crowds. I am now a Global Messenger for Special Olympics New York.

Before I was employed by the FBI, I participated in the Law Enforcement Torch Run as part of Special Olympics New York. Each year, I ran with local officers and attended Polar Plunges. I was proud and honored to work with officers to support my fellow athletes, so we can continue to train and compete in the sports we love. In 2003, I was selected to be an Athlete Runner in the Final Leg. I was thrilled to watch the flame ignite and to carry and deliver it to the World Games in Ireland.

Special Olympics has provided me many opportunities to interact with people from all walks of society and from many different cultures. It has given my fellow athletes a place where we can prove to everyone that those of us with disabilities can work hard to overcome those disabilities and be successful in life. I am very proud of my accomplishments and know I can inspire others to never give up.