The Unified Sports movement is growing rapidly on Long Island. More schools have signed on as Special Olympics Unified Champion Schools here in the past year than in any region of the state, in part because of the example set by schools like Patchogue-Medford, where educators, parents, and students say the program is the best thing to happen at the school in a decade.

“The Unified Champion Schools program creates incredible opportunities for our students and student-athletes,” said Ryan Cox, director of athletics at Pat-Med. “As an athletic administrator, it is an honor to be part of such a supportive program and has been one of the most gratifying and humbling experiences in my career. Our school community, unified partners, athletes, and coaches have benefited physically, socially, and emotionally through the Unified program.”

In a Unified Champion School, students with and without intellectual disabilities play on the same sports team. They also lead events and activities throughout the year that encourage all students to practice and value inclusion. At approximately 250 Unified Champion Schools statewide, the program is reducing bullying and teasing, overturning negative stereotypes and spurring healthy social interactions.

“We see each other all around school. We say, ‘Hi,’ and, ‘How are you doing?’,” Pat-Med Unified Athlete William Stern recently told ABCNY7 News. “It’s just like a family almost.”

Long Island is home to nearly 30 Unified Champion Schools, including Pat-Med, with a tremendous 60 percent growth in numbers expected over the next school year.

Kathy Lally’s daughter, Stephanie, chose to play unified sports instead of the activities she typically enjoys with her friends. The decision changed both of their lives.

“I remember watching the first game with tears in my eyes,” Kathy said. “Steph has truly loved every moment as part of the team and has grown on so many levels from the interactions with her teammates and opportunities to play and live unified. It is so much more than bringing a new program to the school. It creates opportunity for students to learn and grow, on and off the court. It has been such an honor to be a part of the Unified program at my daughter’s school – a positive and fulfilling experience for all students!”

Stephanie wants to continue playing Unified and sharing the movement with others after graduation, and is working with Special Olympics New York on that transition. Her experience was the subject of her college essay, which she shared with us below:

The pit in my stomach grew larger as my heartbeat quickened and my clammy hand reached out to open the door. This was the moment I had played in my head for a month now and it was finally here. Thoughts of turning around, hiding in the bathroom, and running away flew around my mind like a tornado.

The first day of practice was finally here and a feeling of apprehension had swept over me and held me tightly in its grasp. I had never imagined myself on a basketball team, let alone one with people who I hardly knew. When I first heard about Unified Basketball I was unsure of what to do. Should I join the team or stick to playing badminton with my friends? Several pro and con charts later, I decided to skip out on badminton.

My desire to give back to others was stronger than my need to please my friends and so here I was pushing my mental panic button in the hallway. 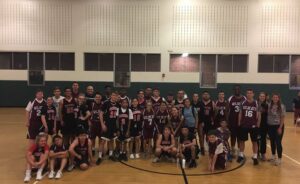 As I opened the heavy gym doors and took my first step into the place where I would spend most of my time for the next two months, I was greeted with the sound of laughter and the thud of a bouncing basketball. I placed down my belongings and started talking to Will and Alex, two of my new teammates. Both boys were very excited because this was the first team they were able to join, since many teams at my high school do not have positions for students with intellectual disabilities. As time passed, I began to make friends with several of my teammates and the pit in my stomach faded away. Before I knew it, practice was over and my decision to join the team was confirmed.

We practiced for three weeks before the moment we had all been working for arrived: our first game. Our anticipation grew as we began to approach our opposing team’s school, and we practically exploded two hours later when we won! Our winning streak continued and before we knew it we were headed to the playoffs.

As we practiced and our skill levels increased, our relationships also grew stronger. On my way to science, Gabe smiled and waved to me. On my way to the bathroom, I saw Will working hard at the Raider Bean, a cafe that serves coffee and cookies to students. On my way to math, Nicole and I discussed the Jonas Brothers and how her day was going. Spending time with my teammates brought new light to my life.

Through these relationships I learned to never judge a book by its cover. I now understand that even though someone may look or behave differently than me or be labeled as different by others does not mean that they are less of a human being or that they should be given any less respect.

When our playoff day arrived, I could hardly contain my excitement. We all boarded the bus together and headed towards our local community college. We played our hardest and although we lost we still gained something that was larger than a medal or a trophy. We gained a new family and relationships that would forever change each and every one of us.

If your school doesn’t play Unified Sports, it should! Contact us at unified@nyso.org to learn more, or use the tools available on this page to advocate for the program.