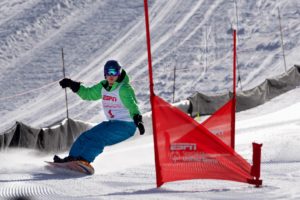 The competition, which will include 10 unified teams made up of a Special Olympics athlete and one of the world’s top action sports snowboarders, will be held Thursday, Jan. 24, at 11 a.m. (MT). It will be streamed live on @XGames Facebook, Twitter and YouTube channels

The Special Olympics Unified Sports program promotes an inclusive sports community by bringing athletes with and without an intellectual disability together to compete on the same team. Special Olympics athletes from across the country will be paired with professional action sport athletes, comprising of a total of ten, two-person teams for Thursday’s event. Each of the team members will participate in one run on each out of two competition courses; the professional athletes racing against one another and the Special Olympics athletes racing one another. The winner will be determined by the best combined times of each team.

“X Games is an exciting event not only because it features some of the world’s best athletes in a thrilling competition, but also because of the awareness and promotion it provides for Special Olympics Unified programming,” said Hengsterman. “Thank you to ESPN for sponsoring this important event once again this year and good luck to Charlie and Jack – the entire Special Olympics New York family will be rooting for you!”

About the New York Team

Special Olympics New York is the largest state chapter in the country, serving nearly 68,000 athletes across New York with year-round sports training, athletic competition, and health screenings. The organization also partners with nearly 150 schools statewide to offer unified sports. All Special Olympics New York programs are offered at no cost to athletes, their families or caregivers.  Learn more at www.specialolympicsNY.org and #SpecialOlympicsNY.