In face-to-face meetings with Members of Congress in both the House and Senate, Special Olympics representatives are inviting elected officials to support inclusive education and health initiatives for people with Intellectual Disabilities (ID). This includes Special Olympics Unified Champion Schools® programming, which is active in more than 7,500 schools across the United States, nearly 250 of which are in New York. Special Olympics is also working to end health care disparities for Americans with ID. 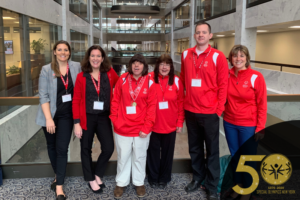 “Our athletes and youth leaders are leading us in a world-wide revolution of inclusion, a collective fight to end discrimination for people with intellectual disabilities,” said Tim Shriver, Chairman of Special Olympics. “Part of our collaborative fight includes the U.S. government’s support not only to help fund critical programming, but to also preserve laws guaranteeing the rights and full participation and integration of people with intellectual disabilities into our society.”

“Special Olympics programming in New York and around the world changes lives every single day,” said Hengsterman. “Our athletes are healthier, they have more confidence, and they make friends they are not likely to have made if they didn’t participate in Special Olympics—this is especially true of our Unified athletes and partners. Special Olympics athletes are showing the world what true inclusion looks like and why it’s important. Even after 50 years, we have so much more work to do to reach all of New York’s communities and those globally. We are proud to be on Capitol Hill today to share this urgent message and ensure continued support.”

In more than 7,500 Unified Champion Schools across the country, Special Olympics has trained and mobilized youth leaders and educators to create more inclusive schools by involving students with ID in all aspects of school life. Social inclusion is promoted by bringing together young people with and without ID on sports teams (Special Olympics Unified Sports®), through inclusive student clubs, and by fostering youth leadership. As many as 3.6 million young people are taking part in these experiences, which are increasing acceptance of people of all abilities while simultaneously reducing stigma and bullying.

In 2019, Special Olympics New York screened a record number of athletes. In partnership with clinical directors and volunteers across the state, more than 2,200 athletes received free screenings in disciplines such as eye care, dental care, podiatry, and more.