The UAE hosted the 2019 Special Olympics World Games, the first to take place in the Middle East. It was the largest sporting and humanitarian event of 2019, featuring 7,500 athletes and 20,000 registered volunteers from more than 190 countries. The UAE refers to people with intellectual disabilities as “people of determination” in recognition of their achievements in different fields. The country has implemented national policies to protect and empower these individuals through services and facilities in the areas of education, health, jobs and more. 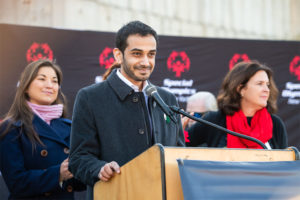 “The leadership and expertise that His Excellency brings to the Board will have tremendous impact as we celebrate our 50th anniversary year and continue our work to make New York the most inclusive state in the country,” said Special Olympics New York President & CEO Stacey Hengsterman. “It is an honor and privilege to welcome HE Shaheen on behalf of our 67,000 athletes and Unified partners across New York.”

“We are proud to welcome Abdalla Shaheen to the Special Olympics New York Board of Directors,” said Board Chair Patricia Martinelli, Esq. “His Excellency adds an international perspective and connects our work here in New York with that of the global movement to inclusion in a way that we have not fully engaged in previously. We are all looking forward to working with him.”

“Under the leadership of Stacey Hengsterman, Pat Martinelli and my colleagues on the Board, Special Olympics New York is becoming the model for what Special Olympics chapters worldwide should strive to be – leaders of a movement that is eliminating intolerance and replacing it with acceptance, kindness and generosity toward people of determination,” said HE Shaheen. “I look forward to continuing the UAE’s support of this powerful movement as a member of the Special Olympics New York Board of Directors.”

His Excellency Abdalla Shaheen was appointed in April 2019 as Consul General of the United Arab Emirates in New York. Shaheen works to promote the important UAE-US bilateral relationship and expand business and cultural ties in New York and the Eastern US region. Consul General Shaheen also serves as a liaison for US corporate and government officials and as a resource for UAE Nationals residing in the East Coast area.

Consul General Shaheen was born and raised in Sharjah, UAE. He received his Bachelor of Science in Business Administration from Embry-Riddle Aeronautical University, Daytona Beach.