Changing the Game: Healthcare Equity for People with Intellectual Disabilities

When my son Alex first complained of “bees in his ears,” our doctor checked him for an ear infection he didn’t have and sent us home. Later that night, he threw up. It was the stomach flu.

The next time Alex told me he had bees in his ears, I thought, I wonder if this is … and then he threw up. That’s how we learned that “bees in his ears” means he’s nauseous.

Alex is one of 200 million people worldwide, and 1.5 million in New York, with an intellectual disability (ID). Because he has Down syndrome, he is not able to communicate his symptoms the way the neuro-typical population can. This basic communications barrier can have an enormous – even life-threatening – impact on the health, medical care, and wellness of people with ID.

People with ID are the most underserved population in the world in terms of quality healthcare. The genetic makeup of most people with Down syndrome and other forms of ID leads them to experience dramatically higher rates of obesity and preventable disease, chronic pain and suffering, and premature death. Alex was born with complex congenital heart defects, has had three open-heart surgeries, dozens of ear tube replacements, and an underactive thyroid. Due to low muscle tone, Alex is at severe risk for hypokinetic diseases (depression, hypertension, diabetes) and, most upsetting, doctors are almost certain he will be diagnosed with early-onset dementia before his 40th birthday. 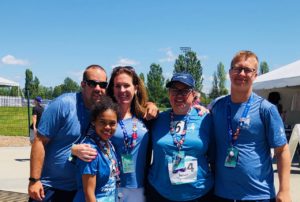 Alex’s medical needs, like millions of others with ID, are greater than the typical child. Yet, people with ID are excluded from many mainstream healthcare policies and practice.

This disparity, which spans the healthcare industry, is not the fault of doctors and clinicians. It is a collective failure on behalf of our systems to educate and train medical professionals to adequately treat people with ID. It’s a failure that stems from decades of misunderstanding, mistreatment, and misdiagnosis. As recently as 2016, 52 percent of medical school deans and students said that graduates are not prepared to treat patients with ID.

I’ve learned more about the healthcare disparities people with ID face in my first six months as president and CEO of Special Olympics New York than I have in more than 14 years as Alex’s mom.

This tells me a couple things. First, Special Olympics is doing some incredible work to ensure people with ID have access to quality, equitable healthcare. Second, nowhere near enough people know about it.

Early in my tenure, I met Dr. Steven Perlman, who founded the Special Olympics Healthy Athletes program after meeting Eunice Kennedy Shriver and treating her sister, Rosemary, in the 1990s. Dr. Perlman opened my eyes to how far and wide the healthcare equity gap really is.

He told me about athletes like Catherine Gruss, whose doctors couldn’t see past her ID to find a tumor in her ear, and Dustin Plunkett, whose cancer would have been missed had he not received a health screening at a Special Olympics competition. Dr. Perlman and his colleagues have thousands of life-altering stories like these to share.

Since its launch in 1997, the Special Olympics Healthy Athletes Program has provided free health screenings in disciplines like dental, eye, and podiatry care to more than two million children and adults with ID, and has provided specialized training to more than 135,000 healthcare professionals and medical students. Special Olympics now collects and maintains the largest data set in the world on the health status of this critically underserved population.

After volunteering for Special Olympics and completing the medical-screening training, 89 percent of healthcare providers say the experience is useful to their daily work, 77 percent say they will seek out more patients with ID, and 93 percent report an improved ability to communicate with people with ID.

The progress this one-of-a-kind program makes is truly amazing. But glaring disparities in equitable care continue to persist.

With data, knowledge, and proven solutions in hand, it’s time to change the game.

Game Changer #1
In addition to the work Special Olympics has pioneered over the last 25 years, there is legislation before Congress today that would officially designate people with ID as a Medically Underserved Population. This would once and for all include them in more than 25 federal programs that expand access to primary care and specialty services, it would support research, it would mandate higher reimbursement rates for providers who treat people with ID, and more. The Healthcare Extension and Accessibility for Developmentally Disabled and Underserved Population Act, or the HEADs UP Act of 2018, is long overdue. Getting this legislation passed is Game Changer #1.

Game Changer #2 comes from within. Special Olympics International has teamed up with the Golisano Foundation, based in Rochester, New York, to expand its health programming, setting criteria for what we call Healthy Communities. Special Olympics programs across the country can work to achieve Healthy Community status by assuring athlete screenings, follow-up care, and ongoing and sustainable health and wellness initiatives for athletes. Special Olympics New York is meeting the challenge head on and taking advantage of this important opportunity. On December 7, we will hold our first health strategy discussion in New York City, bringing together healthcare professionals, experts, educators, and potential funders, with a goal of setting an agenda – first for big cities like New York and Rochester, and ultimately, the entire state – to become a Healthy Community.

New York is Game Changer #3. New York’s social, political, and economic commitment to equity and inclusion runs deeper than any other state, perhaps deeper than anywhere in the world. New York is uniquely positioned to become a leader in health equity for all individuals. Our public and private sectors must work better together to address issues such as preventable secondary conditions, higher rates of chronic conditions, and escalated rates of hospital stays – some of the key indicators that various segments of our population are impacted differently.

We won’t just increase equity by tackling these system changes, we will drastically decrease health care costs. Researchers estimate that eliminating health disparities among disadvantaged groups in the United States would save the health system $230 billion over four years.

New York has historically led on issues that threaten inclusion and equity for its citizens. Working to prevent health disparity for people with ID is an issue we can no longer afford to sit back and watch on. It’s time New York get in the game.