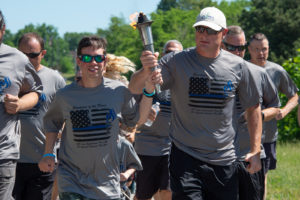 2019 marks the 5th Annual Badges on the Border International Torch Run. This Torch Run will be the Final Leg in New York State as the Flame of Hope is handed over to our Canadian Brothers and Sisters as they carry it throughout Ontario into their State Games.

Members of the law enforcement represented by Federal, State and Local agencies from the United States and Canada will participate as follows:

ALERT: Media requires Niagara Falls Bridge Commission permission in advance to access the property.  Please contact Stephanie Dafoe in advance at 905-354-5641 / 716-285-6322 Ext. 4120.  Stephanie will reach out to both CBP and CBSA media liaison and notify them of any media presences.

The Law Enforcement Torch Run is a time honored tradition of more than 30 years, led and orchestrated by the “Guardians of the Flame,” which includes more than 6,000 law enforcement personnel from 470 agencies throughout New York whose raise funds and awareness for the athletes of Special Olympics New York.